On the Other Hand, It Was

Here it is over a year later, and I haven't updated on my progress with my front room.

No, I didn't fall off the ladder and concuss myself.

No, I'm not done with the room yet.

Yes, I did strip the inside of the front door yet another time and redo it.  This time I skipped tinting the shellac altogether.  Instead, I ordered some dark Bysakhi buttons and brushed on the usual five or six coats.  I think it looks pretty nice now. 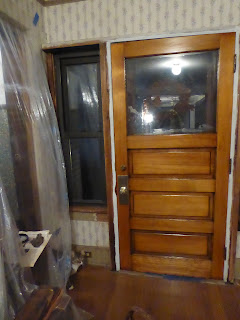 This picture was taken, of course, last year before the wallpaper was removed, the rest of the woodwork was stripped and sanded, the ceiling repaired and painted, and before the walls went through not one, not two, but three faux-finish paint jobs.


Here's version No. 1, with a frieze in Valspar "Brilliant Metals" gold (two shades) and the field in the Brilliant Metals over Olympic One semigloss tinted Valspar color "Hazy Dawn."  That was last March.

Way too intense.  See my Instagram feed at kate_horstman to see how incredibly yellow it was. 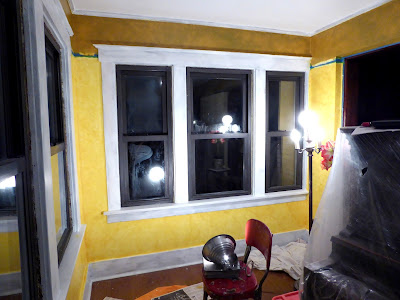 People liked it.  I got nice comments from designers in Italy and other cool places.  But it didn't work for me.


So, version No. 2.  Painted it over with the Valspar "Honeymilk" color I was going to use for the trim, thinned down the gold glaze a little, and tried again. 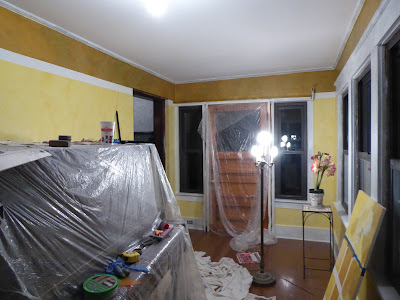 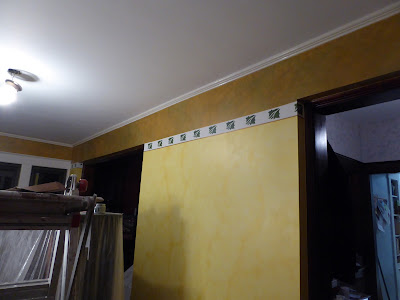 This was popular on Instagram, too.  I painted the trim, and even got my stencil cut and started my acanthus leaf border.

That took me to late April.  I tried to like it, and it would have been really cool in a bigger space in a different house.  But the bright yellow-gold made the red William Morris wallpaper in the living room look muddy.  It just didn't play nicely with the rest of the downstairs.  Aaaaghhh!!!

What-to-do, what-to-do?  Well, back before that fateful night in 2013 when I snagged that mistinted gallon of Brilliant Metals Gold for $4.50 from the paint desk at Lowe's, I had always thought I'd paint my front room a pale green.   I'd dropped that idea because I thought the dining room wallpaper had a greenish tint and two light green rooms would be too much.  But on the wall the DR wallpaper doesn't look green in the least.  So for the front room, maybe that color was back in the running.

Brought chips home and thought and compared and thought some more.  Memorial Day, I picked up a gallon of Olympic One in Valspar "Lunar Tide."  But I did nothing with it till the end of June.  That's when I slapped a coat of primer on the yellow-gold and started over.  The Lunar Tide went on in mid-July. 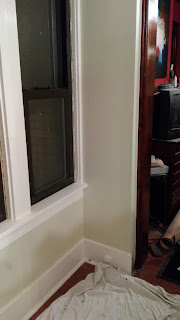 It looks a lot grayer in photos than it really is.

Lived with that for a month or so.  It got along better than the yellow gold had done, but it lacked something.  Depth, maybe.  And just in time, I discovered that our Lowe's was selling off the quart jars of Rustoleum "Metallic Accents" glaze in Sea Shell for around $5.50.  I'd looked at it when it was marked down to $22.97, but that was still too much.  $5.50 I could manage, and I snagged a jar (should have grabbed both of them, but hindsight and all that).

And after experimenting a bit and three or four applications, this is what I came up with: 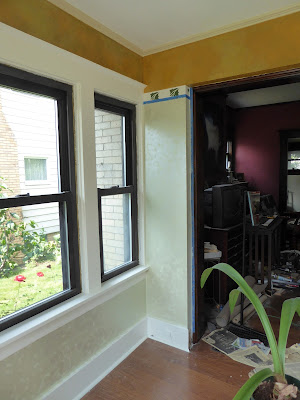 Didn't like the way I'd positioned the acanthus leaf border on the long section of wall, so I primed it over and did it again.  It's a lot more balanced now. 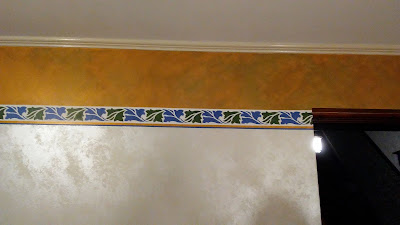 And here's more or less what the room looks like today. 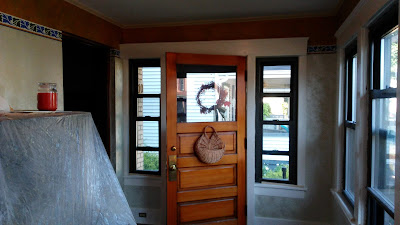 Anyway, that's the update.  The reason I'm blogging about this now is a) guilt, and b) the fact that I was about to post a gripe about this project on a non-house-reno-related forum, and I thought, "Blast, girl, if you're going to spend time doing that, why not do it on the houseblog where someone might actually care?"

And here's my gripe:  That the major, sexy parts of this job are done, and the tasks that are left are fiddling and tedious and inglorious and altogether necessary.  Meaning I have to replace some little pieces of busted baseboard and shoe moulding.  And install a floor outlet behind the piano.  And clean the paint drips off the laminate floor.

And before any of that, I have ten windows to make new stop moulding for, which means twenty copes.  And I hate cutting copes!

But using quarter round for window stops, coping and all, will be easier and safer than ripping 1-1/4" stop mould down to 5/8" wide.  And it'll look cool.  I'll paint it the same color as the cornice so it'll stand out, and once I get the old shutters stripped, I'll paint them the same color and hang 'em up in the front windows.  Something like this: 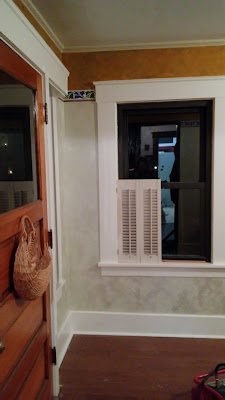 But oh, heavens, I wish this project was done!  Maybe now I've gotten this rant out of my system I'll go down and cut some 45-degree angles for the jambs.  I got the head mouldings, all ten of them, measured out and cut the other day.

Begging your pardon if this post is a mess.  I haven't the time to make it beautiful. 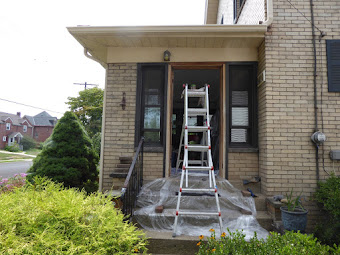